The High School CBS edged out their Tipperary rivals Abbey CBS in the final of this year’s Cleary Cup, the result of which was in the balance until the final minutes of the game.

Played at Clonmel RFC last Friday in perfect conditions, both teams began the game with fierce determination. It became obvious early on that the defences of the two teams were quite strong, suggesting that it would be a tight affair. 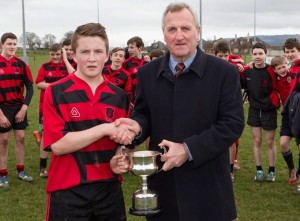 The High School had the better of the play in the first half. Conor McGrath, at out half, kept the Abbey on the back foot with some clever kicking. Centre Cian O’ Sullivan fielded a great cross field kick and was nearly away only for an excellent tackle from Abbey winger Danny Ryan. Abbey centres Ben Quinn and Timothy Corcoran were strong in attack and defence, while full back Alex Ryan-Wynne looked threatening every time he got the ball.

The battle up front was just as intense. The High School, led by number 8 and captain David O’Keeffe, took on their physically bigger opponents. Second row Evan Spillane worked tirelessly making several important tackles, while hooker David Shaw and flanker Jack Phelan made the hard yards carrying the ball. Abbey second row Jack Quinlan and number 8 Ciaran Bourke were very strong in the tackle and a constant threat in the ruck.

The game was still scoreless as half time approached. The High School were awarded a penalty and McGrath kicked to the corner for a lineout. Securing possession, High School scrum half Josh Fahey spun the ball wide for O’Sullivan to be tackled short of the try line. The High School forwards kept the pressure on driving at the Abbey line. But the Tipperary team’s defence was proving very stubborn to crack. Abbey half backsKevin Mooney and Tony Byron were dogged in the tackle. On the 25th minute, after sustained pressure, High School prop Cian Walsh crashed over to score the first try of the match. The conversion, from a difficult angle, was missed to give the High School a slender 5 nil lead at half time.

After the break, the Abbey immediately piled on the pressure. Suddenly, gaps began to appear in the High School defence as the Abbey backs moved the ball wide. Centre Ben Quinn received a lovely pass fromByron just outside the High School 22. With great pace and a deft side step, he beat two defenders to score in the corner. He missed the conversion but the Abbey seemed to have the taken initiative as they proceeded to keep the High School pinned into their half for the next 15 minutes.

Wave after wave of Abbey attack ensued. Jack Quinlan was rampant taking three High School defenders to tackle him. Winger Kevin Doyle came close only to be bundled into touch by High School’s Cian O’ Sullivan. It seemed inevitable that the Abbey would score again. But to their credit, the High School defence held firm. Centre Michael Cleary and winger Cathal McGuigan made several important tackles while in the pack,Luke Sheehan and Jack Moloney rucked well.

As the half wore on, the High School grew in confidence and lifted the siege. The Abbey’s poor discipline did not help their cause and successive penalties gave the High School a foothold in the Abbey 22. Eddie Macintosh was introduced for the High School and he made an immediate impact making a big drive into the Abbey half.

With 5 minutes remaining the match was finely balanced at 5 all. One felt the next score would be crucial. Following a lineout, the High School pack mauled towards the Abbey try line, only to be held up short andCian Walsh unlucky not to score his second try. From the scrum, High School’s David O’Keeffe drove for the line, but the Abbey’s stone wall defence was impressive. The High School were awarded a penalty and opted to run the ball when perhaps a kick would have been the better option. Again, the Abbey’s Jack Quinlan was to the fore in keeping the High School scoreless.

The High School were awarded another penalty for offside. Quick thinking out half Conor McGrath spotted an overlap out wide. He opted to run the penalty passing to winger Mark Fannon to score in the corner. From a tight angle, McGrath kicked the conversion to put the High School 12 – 5 ahead. Despite their best efforts, the Abbey could not break down the High School defence. The referee blew his whistle for full time, to the delight of the High School and their large crowd of supporters.

Mr. Tony Smith, Chairman of the Munster Schools Committee, presented the Cleary Cup to High School captain David O’Keeffe. He thanked Clonmel RFC for the use of their fantastic facilities for the final and he also expressed his appreciation to Brendan Mullan for co-ordinating the competition.

Credit is due to the coaches of the High School, Colm O’Loughlin and James Hayes, and the Abbey, Aine O’ Mahoney, Seamus Kelly and John Rodgers, for preparing their respective teams for the final.