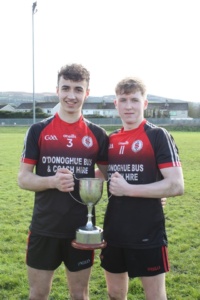 The High School has long been recognised throughout Tipperary & Munster as a great nursery of Gaelic football with players provided from the Clonmel Commercials, Clonmel Óg, Moyle Rovers, Newcastle, Ardfinnan, Clerihan, Kilsheelan/Kilcash, Grangemockler, Fethard & The Nire (Waterford) GAA clubs. Indeed, the High School were the inaugural winners of the Corn Uí Mhuirí (Munster Senior A championship) in 1928 & have a long & decorated history in the Tipperary & Munster Championships.

The High School still competes in the Corn úí Mhuirí & are the only Tipperary school to compete at A level of competition in Munster against schools from Cork & Kerry & St Flannan’s of Clare. The High School has been very competitive in recent years in the Corn Uí Mhuirí, reaching the final in 2016, only to fall to a David Clifford inspired St Brendan’s of Killarney. This marked huge progress for the High School having only rejoined the A grade in 2011. The High School won the Corn Uachtaráin (Munster Senior B championship) in 1986, 2003 & 2010 & followed up the victory in Munster in 2010 by defeating St. Attractas, Tubbercurry by 1-10 to 0-12 in the All-Ireland Colleges Senior B Football Final at Portarlington.

The High School also competes at A level at under 15 & under 16 1/2 level. In 2010, the High School tasted A success at under 15 level by defeating St Brendan’s in the Corn an Bhráthair Choilm Taft Final to win this competition for the first time ever & win a first Munster A title for the school since 1940. Having previously won under 15 B titles in 1967, 1972, 1973 & 2007, the title at A level showed the huge progress being made in Gaelic football in the High School & Tipeprary in general. At the under 16 1/2 age group, the High School competes in the Frewen Cup (Munster A championship) & reached 4 finals in recent years, only to agoninsly fall to defeat in each.

In recent years, the High School has had huge success in the Tipeprary county championships including winning 3 of the last 4 Senior A County Championships & winning 1st year, under 14 & under 15 County A Championships in 2019.

The High School has had players represent both Tipeprary & Waterford at Gaelic football with former students such as Declan Browne & Michael Quinlivan (Tipperary) winning national acclaim in winning All-Stars & former students such as Michael “Babs” Keating, Frannie Kelly (Tipperary), Thomas & Maurice O’Gorman (Waterford)  winning Railway Cups with Munster. in 2010, there were 9 players from the High School on the Tipperary minor football panel as they created history in winning the All-Ireland minor title against Dublin in Croke Park. For 2020, there are 2 former High School students on the Waterford senior football panel with 11 named on the Tipperary senior football panel, with the manager, David Power (Kilsheelan-Kilcash) also a former student. We also have current students on both the under 20 and minor panels.