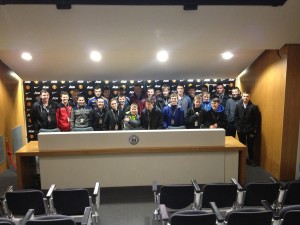 Last February, the school set sail to England for a 3 day trip that  included 2 football matches, a stadium tour of Old Trafford, a visit to  Alton Towers as well as a visit to the Imperial War Museum in  Manchester.

The school sent a large party, 60 in total, which included 54 students  and went to a Championship game involving Wigan and Charlton and a  Premiership game between Manchester City versus Newcastle. Despite  the cold weather, both games did not disappoint with a total of 8 goals  scored. 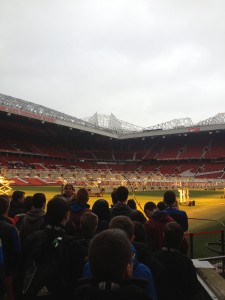 The group set sail early on the Thursday of the midterm break and arrived at Old Trafford Stadium, home of Manchester United that afternoon to get a behind the scenes look of the stadium. This trip was followed by a visit to the Trafford Shopping Centre in Manchester.

The following day the group paid a visit to Alton Towers theme park in Stoke for a day of rollercoasters and amusements.

That night the group headed to Wigan to watch Wigan  Athletic vs Charlton in the Championship. Conditions were particularly cold in the DW  Stadium but the match itself was exciting. Charlton eventually gained the upper hand and  won 3-0.

On Saturday morning we headed to the Imperial War Museum in Manchester City centre.  This was a break away from the sport for a few hours and offered students a real insight into  conditions during the war. The admission was free and this really added to the trip.

The main event took place on Saturday evening when we headed to the Etihad Stadium in  Manchester. Newcastle were the visitors and were well and truly hammered by the home side.

The stadium was very modern and the seats were on the halfway line so the view was spectacular.

The plans for the current school year soccer trip are already underway. The group will be heading back to Manchester again to watch Manchester City v Spurs.