Ahad and Jimmy are honoured
Two High School students, Ahad Ali and Jimmy Delahunty, were among nineteen 2003 Leaving Certificate students honoured by Merck Sharpe and Dohme for achieving an A1 in honours chemistry in this year’s Leaving Certificate exam. We wish them well in their future studies.
Mayoral Reception for Colin 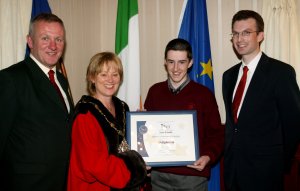 A Mayoral Reception was held recently in the Town Hall, Clonmel for 15-year-old Colin O Keefe of Third Year and nine other Compulearn students to acknowledge their achievement in becoming the first recipients of the new European Diploma in Information Technology (I.T.) Diploma.

This new qualification is awarded to individuals who have attained a number of prerequisite I.T. qualifications as part of the European ICT Skills Roadmap. Colin’s achievement is remarkable and unique because he is the youngest recipient of the award in the country.

The Mayor of Clonmel, Ald. Phil Prendergast, in her address to the gathering commended Colin on his achievement, commenting that “Colin has clearly demonstrated that significant potential exists in the Irish school system for students to attain high I.T. competency and constitutes further evidence of the need for the proposed ‘Broadband for Schools’ initiative to be implemented as a priority”. Amongst the guests invited to honour Colin was High School Principal Mr Shay Bannon.
Brian English
Brian English a fifth year student in the High School is making remarkable progress in the world of motor racing for one so young in a tough sport where his adversaries are almost invariably seasoned campaigners with much more experience. 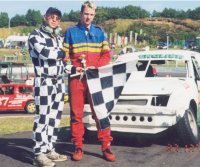 Brian was introduced to the sport as a toddler by his father John, a past pupil of the High School, and a very successful driver both on the track and in rallying. John recognising Brians natural talent nurtured his interest in the sport and Brian has been passionate about cars and motor racing ever since. He is lucky to live near Tipperary Raceway in Rosegreen, where he has developed his skills at the various levels of the sport and now races regularly there in his Opel Corsa in the 1400 c.c Stock Rod class.

Brian has had numerous successes along the way in his meteoric rise through the ranks. Most recently he drove brilliantly to finish 2nd in the Irish Grand Prix in August and he currently lies third in the driver of the year points championship. He went to Birmingham in August to compete in the British National Championships and had a heat win and a second placing there. He has since competed at the ORC championships in Ballymena , Northern Ireland in August.
Dáil na nÓg
David Carroll (5 th Year), having been previously elected from the South Tipperary Council of Young People, attended Dáil na nÓg in Croke Park on Saturday, 15 th November. Delegates discussed the topics of drug abuse among young people and educational disadvantage.

This initiative aims at reaching out to young people to find out their opinions and solutions to problems that affect them. Brian Lenihan T.D. Minister for State heard the delegates’ views. David has been further selected to follow up on government “promises” arising from the proposals put to Mr. Lenihan. Well done David, a career in politics beckons!!!
Johnny and Daragh claim 1st and 2nd places 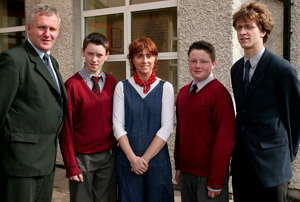 Johnny Kelly (second from right) who won the
competition and runner-up Daragh Ryan (second from left) were photographed at the School with the Principal, Shay Bannon, German teacher Martina O’Reilly and German teaching assistant Frank Lodderman.

The German Institute in Dublin recently organised a nationwide competition entitled Learn Deutsch. It attracted hundreds of entries from schools around the country and two students from Clonmel High School achieved first and second places. They are Johnny Kelly, a second year student who has been awarded a three-week scholarship to Germany as his prize for winning the competition. Johnny will travel to St. Peter Ording on Germany¹s north coast in July. There he will study the language with experienced teachers and join in the various recreations available including golf, tennis, beach volleyball, basketball and sand yachting. Another second year student, Daragh Ryan, will receive German books and tapes for finishing runner-up.
High School finishes third In South-East Business Quiz

A team representing Clonmel High School achieved third place in the WIT Business School Annual Table Quiz for Second Level Students in the South East Region. The quiz took place last week in the College Street Campus, Waterford with over 35 teams from 13 schools in the Region taking part including Waterford, Wexford, Enniscorthy, Clonmel and Tramore. The winning High School team was made up of Conor Horgan, Stephen Britton, Paddy Kelly and Andrew Hickey. The top prize of a computer went to St Peter’s of Wexford, with cash prizes awarded to the second and third- placed teams. Paul Morrissey, Lecturer in Business and co-ordinator of the event, was delighted with the participation of all the schools and said he was particularly impressed with the level of business knowledge displayed by the students. “The quiz, now in its third year is a fantastic opportunity for secondary school students in the region to come to WIT’s campus, some for the first time, and take part in a fun event”, he said. The quiz is part of the Business School ‘s strategy to develop links and build an ongoing relationship with the secondary schools in the South East region.
Jonathan receives Diploma in Information Technology

Jonathan Blackmore, a Leaving Cert student in the High School recently excelled when he was awarded the European Diploma in Information Technology (IT Diploma). This Diploma empowers graduates to be operational in the areas of PC Installation and Maintenance, Networking and Basic Programming. The graduates will have the knowledge to pursue further courses of professional computing study. Candidates must have the E-CERT and the European Certificate in Information Technology to receive this award. The Diploma is also recognised by third level institutes such as W.I.T. and entry points for relevant courses are awarded to recipients of the award.