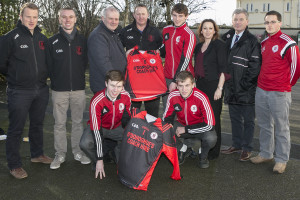 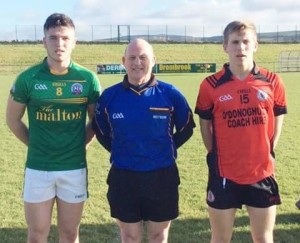 Despite a spirited performance, the High School fell short against competition favourites St Brendan’s of Killarney in an exciting Corn úi Mhúirí 1/4 final at Mallow.

The second half started well for the lads as Paul Maher’s point brought  the gap back to 2 points. In a very even game, it went from end to end  with Paul Maher scoring another great point but St Brendan’s replied  with scores of their own. The game was evenly poised as Ross Peters  again closed the gap to 2 points. St Brendan’s extended their lead again  before Ross Peters had a legitimate point ruled out but despite this the  High School continued to pressurise St Brendan’s but 3 points in a 2  minute spell from St Brendan’s left 5 between the sides. The High School never gave up and Paul Maher and a Rory Maher free had the gap down to 3 points with minutes remaining. St Brendan’s proved their worth at this stage and closed out the game and extended their lead to 4 in stoppage time and when the final whistle blew, it was St Brendan’s who were victorious on a score of 0-13 to 1-6.

It was a brave and courageous team display from the High School as St Brendan’s included current Kerry under 21 and senior Micháel Burns and last year’s Kerry All Ireland minor winning captain Liam Kearney but the lads were in no way outclassed on the day as it was a tight game and if it had not been for the 10 wides kicked by the High School, the scoreline could have had a different complexion. This team are the first High School team to reach this stage of the competition in the modern era so progress was made and with 8 starters and many of the subs still in the school next year, the lads can look forward with hope and expectation and hope to build on this year’s progress.

The High School CBS and the football department would like to thank John O’Donoghue for his sponsorship of new jerseys and to John Owens and Pinewood Healthcare who have sponsored shorts and socks for the players.