On Tuesday the 12th of May, class Tara were winners of the inaugural High School under 14 football blitz. Captained by Cian Walsh, class Tara  swept past all opposition to win the competition, which had 6 teams and over 60 players competing for the coveted trophy.

To mark the presentation of the trophy, ex High School football stars and Tipperary under 21 footballers Bill and Paul Maher were in attendance  and  presented the winning team with a t-shirt each along with the trophy. We would  like to thank Paudie Malone, South Tipperary Games  Development Administrator, who presented the set of Munster GAA t- shirts as prizes for each winning player.
Well done also to the TY’s who managed teams and refereed games within the competition and to Jamie Grant who designed the trophy. 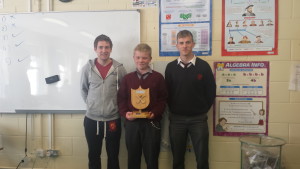 The trophy can now be seen in the trophy cabinet with class Tara marked as the very first winners in a competition that is set to continue for years to come.
Class Tara included players from 7 different clubs including Moyle Rovers Ardfinnan, The Nire, Clonmel Óg, Kilsheelan, Clonmel Commercials and
Ballyclerihan. 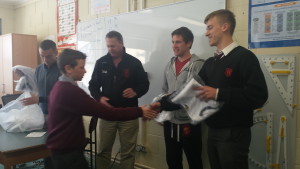 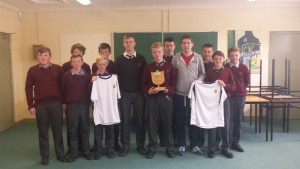